We arrived home Sunday night after being away for over a week.  Since then, my house has not stopped buzzing with the sounds of my washer and dryer and of a little boy rediscovering the toys he had missed playing with.  Nor has my head stopped buzzing- either from fatigue or flashes of memories made in the past week.  And maybe from a tiny hangover, but that's neither here nor there.

Isaac was in rare form while away from home last week and while completing his mission as ring bearer at his uncle's wedding.  The first half of the week he was on edge, responding in shouts like a nervous crack addict.  We finally figured out (I still don't know why it takes me so long) that his stomach yeast was raging.  So after almost throwing him off his grandparent's boat into Lake Wallenpaupack and leaving him for the fish, we decided to hit up the drug store for some powder probiotics.  Why I ever took him off them is beyond me.  Not giving Isaac probiotics is like starving an angry dragon.  He starts breathing fire when he talks and growling that I'm not his mom anymore.

The probiotics helped bring him down a notch and sweeten him up, but he still wasn't the golden child I'd hoped he'd be for the wedding.  And while I can chalk some of that up to being an overstimulated, type A child in a type B situation, I've come to realize that most of what was going on with Isaac was a result of the unholy alliance between Andrew and I's genes inside of him.  He said fresh things all week that made it almost impossible to stifle our snickers while trying to discipline him.  He refused to get dressed if he didn't like the way something felt.  He stripped off his little tux the minute he got to the reception- crying out that he wanted his "normal clothes".  And while I have a tendency to say "sensory issues", which they are, the jogging of my own childhood memories made me realize that Isaac is a little boy version of me at his age.  He even sneaked champagne from the toasting glasses when he thought no one was looking.

There is something about the Chambers/Johnson genes that makes little children more akin to little rock stars.  They want everything done their way, in their time.  They say things that would make truckers blush.  One of my grandmother's favorite memories of me as a child was when we were on a motor home trip to Disney in Florida.  We parked and were going to head down a long sidewalk to a rest stop and get some breakfast.  I stood in the door way of the motor home and surveyed the distance they thought I was going to walk, put a hand on my hip, and said with the growl of your chain smoking Aunt Rosie, "Jesus Christ, somebody better get me a stroller!"  My dad and grandparents almost died on the scene either from laughing or pure shock.

I guess what I'm trying to say is that I'm grateful that Isaac has not yet become a small version of Jim Morrison, and that he mixes his more trying times with an equal measure of entertainment.  After a killer day of picture bombing and not good listening, he strode out onto the dance floor ready to party.  He surprised us with his break dancing skills and that he danced all night- letting us all have a laugh and some fun.  Granted, he did crawl up under the bride's dress, but we can blame that on the champagne, can't we?  In the meantime, I've got some new coping skills up my sleeve after last week.  Too tight socks?  Cut slits in the ankles to loosen them up.  Doesn't want to cooperate?  Bribe with legos.  Need travel friendly probiotics?  Try these kid packets from Culturelle.  Each packet is one serving to slip into their coconut milk, etc. and they do not need to be refrigerated.  They are gluten free and dairy free, for the win!  But the number one thing I learned over the past week is that, pdd-nos or not, Isaac is clearly my kid, and that I'm getting everything my parents ever wished on me.  Touché, mom and dad, touché. 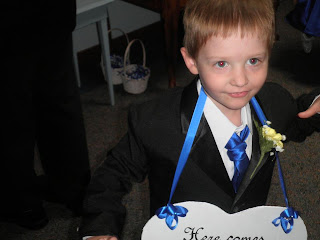