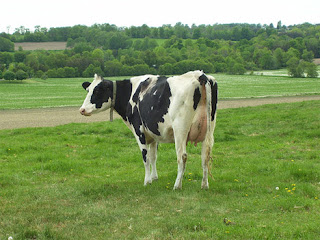 During our second meeting with Early On, they asked if Isaac had any favorite foods that he tended toward.  I confessed that if I let him, Isaac would forgo eating and only drink cow's milk (he was two years old then).  I remember casually commenting that it seemed like he had an uncanny ability to convert milk into sugar, because  after he drank it he would buzz around like a bee.  This is a cute way of saying he would literally run clockwise circles around our ground level for hours.  I was a lot thinner back then because of this.  I was also exhausted.

My EO workers kindly told me that my observation was pretty much dead on, and then warned me that when we met with the OT, Paula Johnson, in two weeks she would tell me to cut out dairy and possibly gluten.  Panic, skepticism, and desperation were the soup d'jour that day.  Looking for any excuse not to cut out dairy- my meal "helper"- I called our pediatrician to get his opinion.  How would I get Isaac to eat vegetables without sprinkling shredded cheese on them?  But a near sleepless night with a hyper two year old and an "all clear" from the head of MSU Pediatrics sparked a worth-a-try attitude in me.

To begin, we decided to try cutting out dairy for the second half of the day.  I was desperate for a decent night of sleep that didn't depend on a two hour long dance party with Isaac beforehand.  To my skeptical, Jenny McCarthy snubbing surprise, it worked.  Isaac started sleeping better immediately.  So we eased into fully deleting dairy with some trial and error over the following weeks.  Two weeks later, at our first appointment with Paula, he was already remarkably different- less hyper, sleeping better, and quite frankly seeming a lot less autistic.  Over a year later, studies are showing "milk sugar" to be a menace to more than just the autism community.  Check out this interesting article that I found last night:  www.huffingtonpost.com/dr-mark-hyman/do-milk-and-sugar-cause-a_b_822163.html  I definitely thought about this as I ate my bowl of strawberry frosted mini-wheats and 1/2% milk this morning.
Posted by Libby Loucks at 1:04 PM