So far our candy-free Halloween has been going according to plan.  Isaac had his party at school yesterday and I sent in gfcf pumpkin shaped sugar cookies, gfcf frosting, and gfcf chocolate chips to decorate them with.  In all honestly I thought it was going to be a huge pain in the butt to do this, but it ended up being fine.  I used the Cherrybrook Kitchen sugar cookie mix and vanilla frosting.  I dyed the frosting orange with organic carrot juice (as suggested by a friend.  Thanks, Tiffany!), and discovered that Isaac likes to drink carrot juice and does well with it since it is not fruit juice.  Win!  The second to best part?  They were a hit.  The BEST part?  It made Isaac's day and sparked a really long conversation with him before bed about school.  Sometimes the extra effort makes more of a ripple than I expect.  I knew he'd love the cookies, but I didn't know it was going to get him to tell me about his day in more detail than ever before.  He was very proud to get to share his cookies with his friends and it showed.  Side note:  Isaac has shared two stories with me this week about trying to play with and share with two different classmates.  One hit him and one pushed him.  Gee, I wonder why he has a hard time playing reciprocally at school?  I am making my snotty, eyebrows in the air, always-right face right now- in case you were wondering.

Last night we carved a pumpkin.  By "we" I mean Isaac drew a face on the pumpkin, Andrew carved it, and I took pictures.  Here is my favorite: 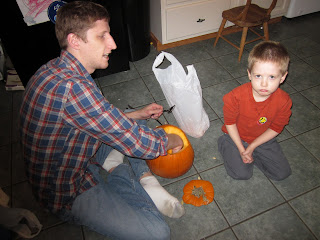 His face clearly says, "There is no way I'm touching pumpkin guts.  Give me the knife!" 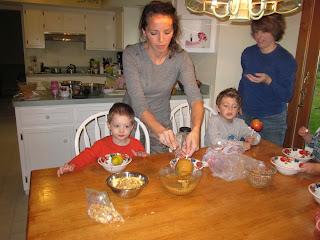 Last week Isaac made a gfcf caramel pear at our friend, Michelle's house during play group since we don't do apples. She was awesome enough to make caramel he could eat. 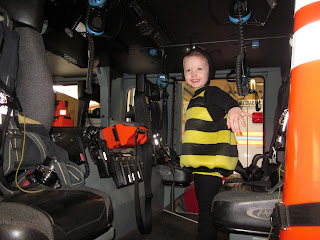 Today we trick or treated at the fire station and Isaac got to climb in the trucks.  Super fun!  We'll be doing this next year.  Best part?  They gave us a bag with a glow stick in it, not candy.
We're having a lot of fun and Halloween isn't even over yet.  More to come!
Posted by Libby Loucks at 3:02 PM