Grateful and obsessing as usual

There is a trend on facebook right now where people post things they are thankful for every day.  I have to say that it's been neat to see people really striving toward gratefulness every day- even if it is only on facebook.  While I have yet to take part in this trend, I would like to mention a few things that I'm thankful for here.  Today Isaac went down for the children's message at church without me accompanying him for the first time, and he sat and did fine.  The service itself was unusually long as today is All Saints Day, and I found myself growing antsy after the hour had come and gone without the service ending.  Isaac did as well as any four year old could in that situation, and I'm grateful for the people sitting near us that took his fidgeting in stride.  I'm thankful that last year's anxiousness about him starting Sunday school and leaving the church nursery has proven unnecessary so far.  He's really growing up.

There is a situation, however, that has Andrew and I scratching our heads lately.  Every time Isaac is approached by someone unfamiliar he becomes silly, won't make eye contact, and talks in a high cartoonish voice- refusing to answer any questions or to say anything that makes any sense at all.  No amount of coaxing or guiding gets him to act as expected in these situations.  I even gave him the option of looking at the highest point on a friend at church's shirt today instead of at his face, but I think by that point he was already overstimulated and ready to go home.  In fact, I know he was.  He even turned down going to Five Guys Burgers and Fries after church- saying that he just wanted to go home.  Still, this situation occurs a lot.  Last weekend we ran into one of Isaac's parapros at Target.  She was with her kids and introduced them.  Isaac immediately stopped behaving and started running around the racks- refusing to say hi or answer questions for a woman he sees 5 days a week.  I'm going to go ahead and just say that I know that this is pay back for my childhood.  If I were Isaac in that situation I probably would have said some smart ass remark that would have been far worse than any hyper activity he displayed that day.  I'm pretty sure I would have said something like, "You look too old to have kids that young.  Are you sure you aren't their grandma?"  Because that's the kind of kid I was.

As comforting as it is that remarks like that don't typically cross Isaac's mind, the obvious lack of social skills here has been the topic of discussion more than once in the past week.  The only thing I can think of is sitting down and writing a social story for him- it worked for teaching him to answer how old he is when asked.  I wonder what the chances of getting Andrew to draw the pictures this time are...

In other news, I found this book today, 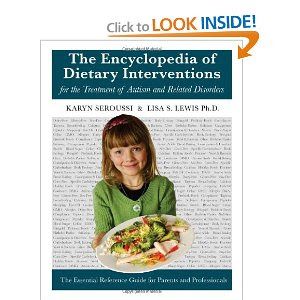 and am thinking of purchasing a copy for our family doctor as a reference book.  I honestly think she'd be interested.  I would also like to buy a copy for everyone that rolls their eyes at me about Isaac's diet.  I'm sending snotty mental waves to all of you- you know who you are.  It looks to be the most comprehensive and highly rated book about the topic of dietary interventions.  I know that a change of diet does not help everyone on the spectrum, but it did help Isaac.  Anyway, if you're interested in learning more about the food land we live in, or even just eliminating un-helpful foods, this looks like a good place to start.  In the meantime, I hope you aren't getting sick of my usual cocktail of obsession and gloating as you'll most likely be seeing another post after tomorrow's parent/teacher conference.  Hooray!
Posted by Libby Loucks at 10:45 PM