A Note on Nativity 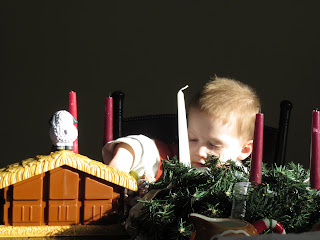 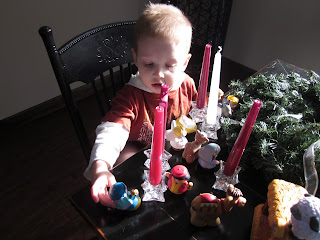 I don't know if you can see it very well, but he has baby "Cheeses" facing the white candle to show him it. 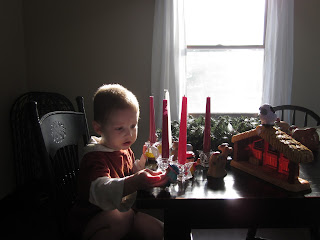 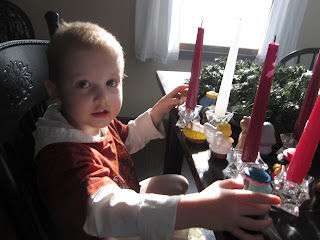 Making our own Christmas traditions has been a really unique part of being parents.  Christmas has a new meaning to me now that we have Isaac.  I've been able to put to work some of my college education and almost-degree in Educational Ministries through thinking critically about what I want Christmas to be about for Isaac and then trying to implement my ideals into our practices.  This year it's been about introducing him to the Nativity story.

Now three, this is the first year that I think Isaac really "gets" Christmas, or at least understands on a very base level that it is a special time of year.  Our Christmas traditions in the past two years have been simple: We don't do Santa, we give 3 presents a piece, eat the same special meal, and go to church.  This year we were able to expand a bit.  For one, I made sure we got out the Advent Wreath and bought candles (despite how late this happened), and I'm glad I did.  The candles sparked some curiosity in Isaac, and opened some very simple discussion.  He now refers to the white candle as Jesus' birthday candle- I don't think you can get much more accurate than that. Today I caught him "showing" Jesus, Mary and Joseph the candle.  He then brought all the characters and stable out to the table to have a "birthday party".  It definitely warmed this former Bible major's heart.  The whole scene had an innocence and beauty that this busy season can often lack.  At night we've been reading all of our versions of the Christmas story.  He loves it, and I'm finding myself way less critical of the details and illustrations as I was in college when studying this stuff.  I'm just concerned with him getting familiar with the story- we'll worry about whether or not Jesus had blond hair and action-figure muscles later...say when he's 6.haha  I even found myself ordering the Nativity movie off of Netflix yesterday- something this Christian-Liberal-Reformed never thought she'd be into, but now that my kid is three and I'm forming what Christmas means for him I find that I'm caring less about the vehicle and more about the message- at least for now.