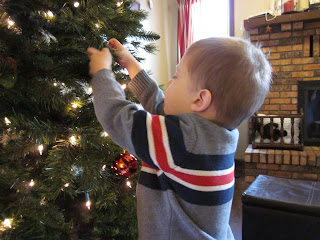 Does anyone else feel like hibernating right now?  Andrew and I have been noticing a general malaise about ourselves.  Ok, it's more like we both want to eat a big bowl of pasta, wash it down with hot chocolate, and then curl up inside our Christmas stocking for the next three months.  I suspect we aren't the only ones.  Isaac has been going to bed by 7:30pm most nights and not getting up until after 8am.  Very strange for my usual early bird.  This is great for a mom with a major sleep debt, but not so great when school starts at 9am.  Also, these winter blahs aren't helping much in the way of finishing these house projects.  Oh well, that is why God made coffee.  So I'm sitting here drinking my coffee and waiting for the caffeine to kick in.

As much as I hate the winter blahs, I love this season.  I love snow.  I love Advent.  And I LOVE having a three year old boy who loves Christmas.  Saturday we went to Home Depot to get paint and Isaac walked around saying "Merry Chrimmas" or "It's Chrimmas!" to everyone.  We didn't teach him to do this (that I know of), so I can't take credit.  But I wish I could, because it definitely lit up some strangers' faces.  We put up the tree yesterday and he was in a word, adorable.  He got right into helping decorate it.  Andrew even lifted him up to put the star on top of the tree.  We were very Leave it to Beaver for about 10 minutes.  After school today we opened up his new Little People Nativity set- complete with a little blond haired baby Jesus.  Hey, beggars can't be choosers and it was the LAST ONE and ON SALE.  Isaac loved it.  We named all the characters and read his kid's version nativity stories from our three books/Bibles.  It was very impromptu on our living room floor, but also very perfect.  He was in the mood to listen and talk.  He then staged a chasing scene involving the camel, Joseph, and Jesus.  "Run Jesus run!"  This is more biblical than either of us realized at the time, but Jesus did have to run from Herod for awhile.  Anyway, after that we went downstairs to draw pictures with some new paint brush markers we received from a friend.  Isaac wanted to draw trees- which I have to brag that he is pretty good at.  This turned into drawing Christmas trees and presents.  "Mommy, you draw! Draw a BIG present!"  This eventually morphed into what is often on his mind lately- dragons.

He is obsessed with the new How to Train Your Dragon movie.  He quotes it when I am trying to get him to tell me what he wants to eat or what he did at school.  He pretends that his little animals and insects are the "small dragons" and he has them fly around and look for the cave or castle.  SCORE one for this mom who bought him a play castle for Christmas back in October.  I love his imagination- even if he seems to get lost in it sometimes.  When we're drawing pictures together it's like he is telling me a story- or answering questions I ask him everyday that he can't seem to answer any other way.  Today he had me draw a sad face, mad face, and happy face pumpkin- an activity they did in school in October.  He drew rainbows, faces, trees, etc. and named them all today.  (In fact, his talking was better than usual today.)  These are all things he's done in school.  He can't always tell me, but he can rein-act it for me when we draw together, and with the pictures come the words.  All this made me re-realize why having one on one time together is so vital for us.  Today has been a good day, and for that I'm grateful.
Posted by Libby Loucks at 2:58 PM