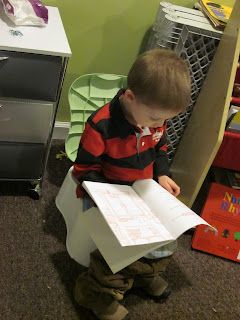 We found Isaac like this today.  This kid cracks me up.  And yes, he is pooping here which makes this picture perfect!

He's got personality- that's for sure.  One thing I love about Isaac is that he is easily amused and easily delighted.  Last night we went to McDonald's for dinner during Andrew's break from work.  On the way in we noticed a sign advertising $1.99 Happy Meals.  Isaac had never had a happy meal before.  For one, we never used to eat at McDonald's, but now that Isaac is on a gluten free/dairy free diet we've found it to be one of the easiest and cheapest places to find him food out.  Their fries and meat are gluten free.  We usually just get him a small fry and a grilled chicken patty, but last night felt like the right time to christen him a true American toddler and get him his first Happy Meal.  Plus, $2 is what the chicken patty costs all by itself and I can't pass up a deal.  So we got him a hamburger happy meal sans the bun.  When our order was taking a few minutes to make, Isaac stood at the counter waving his hands, explaining "small fry! water!" to the McDonald's workers.  I think it took 3 of them to figure out how to make a hamburger without a bun.  Anyway, we were at the doubledecker McD's on campus which meant we also got to eat UPSTAIRS.  Judging by his excitement, you would have thought we just bought him Disney World or all of the coconut ice cream in the world.  "Come on, daddy! Upstairs!"  I honestly don't know what thrilled him most; sitting upstairs, the personal cup of ketchup, a hamburger instead of the usual chicken, the toy that came in the happy meal, or the fact that we got to eat dinner with daddy.  All I know is, biased or not, I am blessed with a little boy that truly appreciates the littlest of things.

Many of you have asked me how Isaac is doing now that our foster children have moved to a different home.  I guess the answer to that question is two-fold.  He has not asked for or about the boys once- which surprised me a little.  However, he was with me when I took the boys to respite care the day before Thanksgiving.  I explained to him that the boys were going to Nancy's house and that we were going to grandpa's house.  I think being with me when I dropped off the boys, and saying a quick goodbye really did do the trick for him.  He seemed to really understand that we were going in different directions.  Also, going right to my parent's house for a few days instead of going back to our house with no Isaiah and Jycear probably helped.  Out of sight, out of mind as they say.  While he hasn't asked about the boys or even said their names, he has gone back to some of his quirks from before the boys came to live with us.  He is back to carrying little plastic toy animals EVERYWHERE with him and asking about certain ones when he can't find them.  Do I think he misses having a play mate?  Yes, but I think he likes being able to play by himself without being bothered too.  He's definitely calmer now.  Imagine having sensory processing disorder and having a very high energy, very strong two year old chasing you around all day and constantly touching you, pushing you, and practically being on top of you.  Fight or flight, indeed.  Isaac's routine is more lax now, partially because it can be and partially because there is no Isaiah to lead the way.  Monkey see, monkey do definitely had it's advantages.

While we all miss the boys, life is more simple now which I think we all needed.  On our way into McDonald's last night Andrew commented on how much he missed "being able to do this."  Meaning, calling me up last minute to do dinner and me being able to pack up and go right then.  Pretty easy to do with one kid, not so easy with three under the age of three.  The fact is, having a kid like Isaac (as good as he is), takes some extra.  Some days he feels like having three different kids, all at different ages.  For example, while I was dressing him this morning I noticed a big ugly scrape on his shoulder.  Neither Andrew or I knew how it got there.  Isaac looked at it and said "owwie" and was visibly upset, but that was about all he could say about it.  His teacher also didn't know if it was from school as she isn't there when he goes to gym class.  What's heartbreaking to me is that even if Isaac remembers how he hurt his shoulder, he can't get the words out to tell me.  This is an every day struggle for us.  Sometimes his language is very clear and he surprises us, but usually verbal interactions take effort on both ends.  Sometimes he cries and says "owwie" or just "ah! ah!" when what he means to say is "I have to go potty".  I often feel like I am a translator in a country where only he and I speak the language.

For our first two days of Thanksgiving break this year Isaac spoke mostly jibberish all due to accidentally getting a hold of some cheerios the day before (Isaiah was good at sharing some things!).  He spun in circles, woke up in the night, was hyper, impulsive, and on edge.  He couldn't look at my aunt when she talked to him.  It felt like traveling back in time to a year ago, before putting him on the diet.  My grandma quipped that no wonder I was tired.  After having talked up all his progress on the phone to my relatives and parents, I felt deflated.  Luckily, nature called via one massive bathroom visit and after that he was back to talking and acting like 3 year old Isaac again.  It's crazy, but even grandma noticed the change in him- "like night and day".

Isaac's teacher and I discussed his mood today when I dropped him off at school.  I found out that she had laid several books on the table and let them pick which one they wanted to take home so he aptly picked out the Just be nice...and say you're sorry! book.  I asked if he was grumpy during school yesterday.  She said his mood changes a lot throughout the day- something I have also been noticing.  Lately, I'll ask him a question like "do you want mac and cheese for dinner?" and he'll answer me in a low, mean, gravely voice that isn't his own, "no, mommy, stop it!".  He accompanies the voice with his brows furrowed over intense, angry eyes.  Sometimes he'll even take my hands and squeeze his nails into them for added effect.  He'll do this even if he ends up wanting and being fine with having mac and cheese for dinner.  Who is this?  A character of his? A 13 year old moody character whose voice is changing? Is he just frustrated?  I have no idea...
Posted by Libby Loucks at 10:57 PM